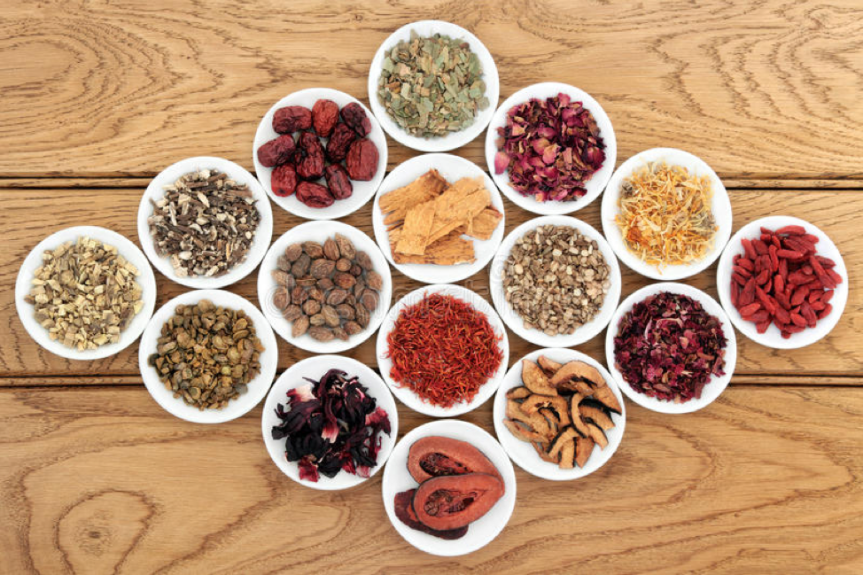 Before acupuncture was discovered, other methods of healing were known and commonly used in ancient China. Prior to the first known Chinese medical texts, which brought together various theories and modalities forming a complete system of medicine, two main predecessors of Chinese medicine existed. The first and maybe oldest form of medicine in China is known as shamanic medicine. This included more ritualistic healing such as chanting, dancing, incantations, and was based on “spirits” and “demons” that a shamaness would try to dispel from the “possessed” person. The second precursor to modern Chinese medicine is folk medicine. This type of medicine had some elements of ritual and superstition to it originally, as it probably derived from or parallel to shamanic medicine at its origin, but the main difference is that the herbal properties became central to the treatment rather than merely just being used as a prop or medium for the Shamaness’ incantation. It is this type of herbal folk medicine that became the roots and really the first modality of the Chinese medical system that has flourished for the last 2500 years.

One very unique and important concept from Chinese herbalism that differs from most other systems of herbal medicine is that herbs are rarely used as single herbs. In Western herbalism, time-tested formulas are seldom passed on to herbalists the way Chinese formulas have been passed on and modified over the last 2500 years. Instead, Western herbalism tends to think in terms of single herbs. For example, if a person is suffering from insomnia, an herbalist might suggest a tea with a random assortment of sedative or relaxing herbs such as lavender, chamomile, kava kava, valerian root and clary sage. While this might sound like a “formula,” it is really more of a “shotgun” approach of mixing herbs at no specific ratios with little to no thought with regard to balance and direction, as these “formulas” are usually a random compilation of herbs based solely on the known therapeutic actions of each herb. So, while these herbs do possess anxiolytic and sedative properties to help with the symptoms, this process is not nearly as comprehensive as the process used to create the intricate, balanced, architecture of a time-tested and time-honored Chinese herbal formula.

While acupuncturists do learn single herbs in school, students then move on to learning important herbal combinations or pairings that will frequently be seen together once they advance to studying herbal formula science. The single herbs and combination pairings certainly help immensely for understanding their roles within any given formula, but ultimately it is the synergistic effect of all the herbs combined that make it unique for treating certain conditions, not any one particular herb or therapeutic action of a single herb. Chinese herbal formulas can be constructed in several ways, but many of these details are way beyond an introductory post, so here are some of the basic rules of formula design for the sake of appreciation of all that goes into creating these powerful remedies in comparison to the more “shotgun” approach described above that sums up most schools of modern herbal medicine.

The basic architecture of a Chinese herbal formula consists of jun, chen, zuo and shi (emperor, minister, assistant and servant). The emperor herb is like the leader of the formula.  It is usually written first and often has the largest dosage in the formula. It exerts the chief therapeutic action and has a strong influence on the overall direction of the formula. Direction can mean to a specific organ or channel, or it can mean a general direction such as up, down, in or out. The minister herb has the role of either reinforcing the chief therapeutic action of the emperor, or it might treat a secondary complaint or pathology depending on the specific formula. The assistant herbs are used to amplify the effects of the emperor and/or minister herbs. They are sometimes used to treat a tertiary complaint in certain formulas. Assistant herbs can also be responsible for controlling adverse side effects, lessening toxicity or just taking the edge off of harsher herbs. In some formulas, the assistant is even responsible for balancing the formula by adding an opposite flavor, temperature or directional quality from the emperor and minister herbs to keep things in check. The servant herb can be used to either guide the other herbs in the formula to a certain part of the body where the disease is located, or guide the other herbs to a particular acupuncture channel. It can also be used to regulate the temperature and flavor of a formula or harmonize the formula so all the other ingredients come together without conflict.

While all the ingredients in a Chinese formula have precise ratios and dosages, it is possible to modify a formula for an individual if they have other symptoms or complaints that vary from the key characteristic indications a formula has been used for traditionally. In this case, herbs can be subtracted, added, substituted, or the dosage of an herb(s) might be altered to best suit the needs of the patient.

Lastly, several administrative forms are traditionally used in Chinese herbs. The most common traditional method is decoction. This requires boiling raw herbs, straining, and then drinking the tea. Some herbs are grounded into a powder and can be taken in capsules or mixed in warm water. Traditionally, pills were often used by mixing herbal powders or extracts with a gum, starch or honey for certain types of disorders. Herbal pastes can be made by boiling herbs in water or oil for a long period of time. These can be used internally, but most often are for external use. An herbal wine can be made by soaking herbs in liquor or boiling them in alcohol. Herbal wines are often for internal use, but can also be used topically in some instances.

Ask your acupuncturist at Stepping Stone Acupuncture & Wellness if a custom herbal formula might benefit your condition. In certain cases, herbs and acupuncture combined will yield superior results due to the synergistic effect of combining multiple modalities into the treatment plan.